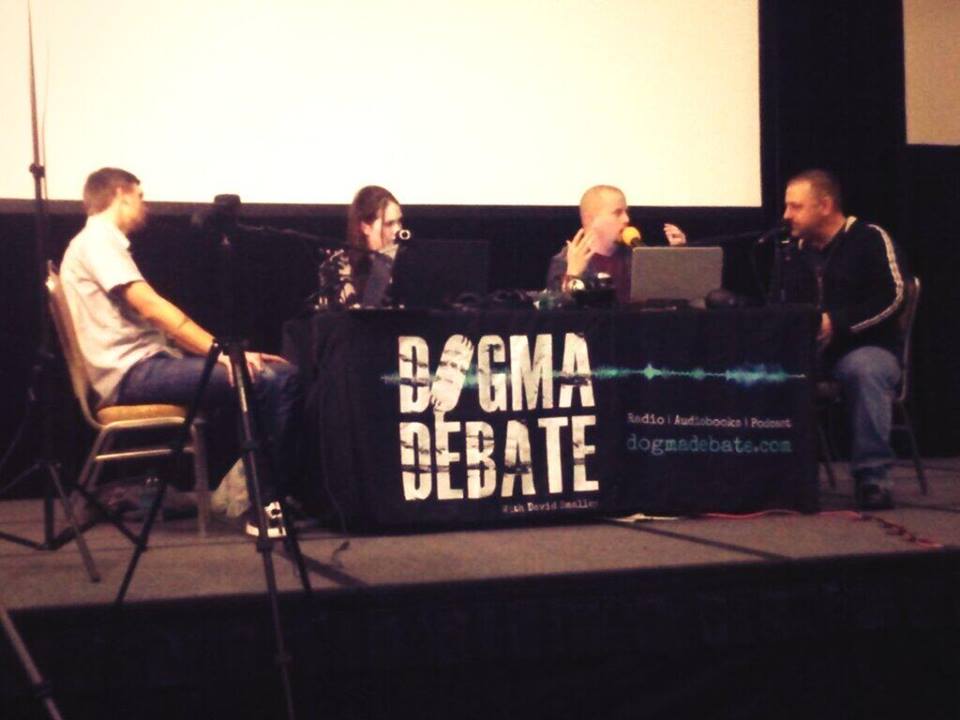 Skepticon is the nation’s largest FREE skeptic convention held annually in Springfield, MO. This year I was invited to be a part of the convention as a guest on Dogma Debate and was allowed to complete filming for my upcoming documentary movie My Week in Atheism. I have no way of knowing whether I was the only Christian present in the convention, but I am fairly certain that I was the only Christian with a microphone in front of them on stage. As such, I want to commend the Skepticon organization, Dogma Debate and all their 4th Listeners, as well as every other person I met, everyone treated me with gracious respect despite our differences. I never once felt threatened or at risk for any reason and in fact the complete opposite was the case. I was greeted and departed with warm smiles, hugs, and many new friends.

On Friday, the first day of the convention, Dogma Debate was broadcasting a live podcast from the main stage and I was part of the show for an entire segment. The show can be heard at Spreaker.com. During the broadcast David Smalley and I were discussing whether or not I have a confirmation bias while researching my Christian beliefs. I began my answer in agreement based on what I thought David was asking me and not on the definition of a confirmation bias. The problem this creates is I assumed what David’s intent was rather than asking him to define his terms. This is Debating 101, we need to define terms before we discuss them, and on this occasion I am guilty of not following protocol. My assumption was based on previous conversations with David and not on the current questioning. I think we can all be guilty of this at times and I was no exception. We often assume what our opponent’s intention is in asking a question and respond to that rather than the question being asked. David and I have a history between us where we have grown to be more like brothers than a host and guest. In my assumption, I believed, based on past conversations that David was asking me if I do theological research with the presupposition that God already exists and so I answered “yes”. That is not what he was asking. I am aware of what a confirmation bias is, but again, I didn’t feel this was what was being asked, and I was wrong. Rachel clarified the conversation and I responded that based on her definition I would change my answer to “no”. A confirmation bias would require me to ignore the opposing information to any of my theological beliefs. I definitely do not do that. I have read Dawkins, Hitchens, Harris, Dennett, Sagan, Hawkings, Hume, Nietzsche, Freud, Marx, Fitzgerald, Carrier, even Smalley himself, and the list goes on and on and continues to grow. If I listed my library by author it would become evident that I am not researching only the information that confirms my bias. I take pride in researching all perspectives on an argument whether it is among skeptics or within Christian academics. In fact, the original email that sparked our documentary movie was sent to David titled My Week of Atheism in San Francisco:

9/21/2012
TO: David Smalley, David Fitzgerald
SUBJECT: My Week of Atheism in San Francisco

I thought you’d get a kick out of this. I spent the week in San Francisco for a conference; had dinner with David Fitzgerald, read Richard Carrier’s Why I’m Not A Christian, and while driving around all week listening to David Smalley’s Baptized Atheist…can’t claim I’m not giving you guys a fair shake.
Take Care,
John

Perhaps my response could have been much clearer on the air both Wednesday and Friday when approached with this line of questioning. On the Wednesday show, I took offense to being assumed that after the history between David and me, I was accused of having a confirmation bias and I responded out of anger. My emotions were high and my argument suffered. I should have remained calm and provided a well reasoned answer that could have provided evidence that my research is not only open but most times directly involves counter arguments. While I admit my bias is toward Christianity this does not mean that I study with a closed mind and only consider the information which confirms my bias. What I have learned over this situation is first, the importance to define terms so we do not make assumptions, and second, to not be so quick to take offense. If I cannot remain calm and respond with reason in a respectful way then I should not be representing Christ publicly. I still have work to do.