A talk show at the intersection where Christianity and culture meet. Topics include religion, spirituality, and philosophical belief as well as non-belief. John is a student of Religion, Theology, Biblical Studies, and is currently pursuing a Masters degree in Christian and Classical Studies. John also directed and starred in the Documentary film My Week in Atheism. 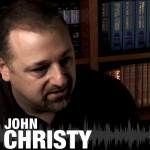 JOHN CHRISTY
The Church of Jesus Christ of Latter-Day Saints

The Church of Jesus Christ of Latter-Day Saints

John has a conversation with Steven Gale, a member of The Church of Jesus Christ of Latter-Day Saints. The discussion includes the name of Mormon, The Prophet, Salvation, and the After Life.

John talks with former atheist activist, Adam Collins, about his burn out in activism as well as predestination, free will, sin, and even the Declaration of Independence.

John talks with Ryan Townsend, known as the TikToker "Bushman" about his conversion to Christianity and what led to his transformation.

A discussion on God, evidence, and truth with host of The Canadian Atheist podcast, Micheal Stuart (@the_ca_podcast).

Can We Lose Our Salvation?

A discussion about recent leaders in Christianity have renounced their faith. In studio is Bob Stone (bobstonema@outlook.com) and on the phone is special guest Thad Chwierut (tchwierut@hotmail.com).

When Was the New Testament Written?

A discussion on the dating, authorship, and myths around the New Testament

How Do We Believe?

A discussion on whether belief is innate within us all or something only few can attain.

Is the Bible God's Word?

Is the Bible a dictation from God or just writings by men? A discussion about what "The Word of God" means.

A discussion on Satanism with Author and Satanist Damien Ba'al. What is Satanism? Damien explains in his book, The Satanic Narratives - A Modern Satanic Bible, that Satanism is not what tradition would have you believe.

A discussion on the existence of God with Author and atheist Michael Spry. Is there compelling evidence to believe in God? Michael's book, "No Santa, No Tooth Fairy, No God" claims the answer is no.

Hell - Does it exist and would a good God really punish people for eternity? Former Pastor and good friend Bob Stone.

A discussion on self awareness and the belief that all the answers are inside of you. Can you trust your inner being? Author and Well-Being Therapist Jamie Lerner.