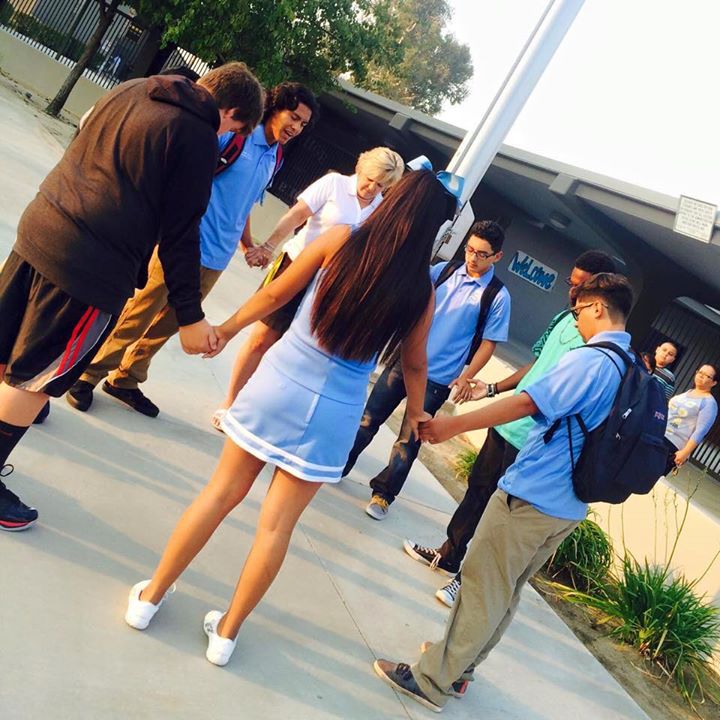 I have often been sympathetic to opposing beliefs in their feelings toward organized religion, in most cases Christianity, being pushed onto them. In the United States, no one has the right to force their beliefs on anyone, especially the government. All individuals are protected from the government imposing religious belief under the third article of the Bill of Rights, commonly known as the Separation of Church and State. However, in this most recent case involving a school principal attending the See You at the Pole morning prayer before school (see photo below), the Freedom From Religion Foundation (FFRF) felt the need to send a letter to the Kern High School District in Bakersfield, CA.

The photo below was posted on Facebook in support of Connie Grumling, the Bakersfield High School principal, participating in the student led prayer. The FFRF claims their “purpose is to protect the constitutional separation between state and church”, yet this letter completely violates the amendment they wish to protect. Throughout the letter, FFRF cites several cases where teachers and coaches were found guilty of violating the state and church separation while claiming that “district staff should be reminded that they cannot plan, promote, or participate in any religious events”. And that’s where the deception trickles in. Any good lie includes 75% truth and this lie is no exception. Public school employees are not allowed to plan and promote religious events (that the 75%), but to exclude them from participation in religious events is a direct violation of the Bill of Rights third amendment which provides true protection of state and church separation. The state is not allowed to promote or prohibit the religious expression of anyone, including government employees. Connie Grumling, the principal, did not organize or lead the prayer. In fact, in the photo you can clearly see the student who is leading the prayer. Additionally, no individual citizen of the United States forfeits their individual rights because of their government position. We are all entitled to freedoms protected by our Constitution.

The legal cases the FFRF cites as evidence collapse on their own merit. The cases cited are in reference to teachers and coaches who had part in the planning and/or the leading of the religious events. That is what caused the violation, not the participation in the events. The leading and organizing of the events – they even point this out in their letter. The irony in this whole situation is that while the FFRF claims its purpose is to protect the Constitution, they trample on the rights of the individual whom the Constitution exists to protect.